Click below for current information on Larson Tool & Stamping Company and the metalworking industry.

Attleboro, MA—May 29, 2019—Larson Tool & Stamping Company is pleased to announce that Manny Resendes, who previously worked for Larson for 20 years, has been hired as a new engineering manager. 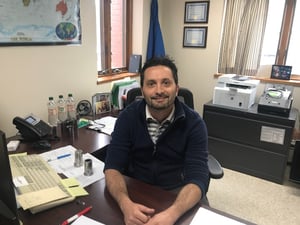 Resendes has worked for the company in various capacities over the years. He started at Larson in 1996, just out of a machine shop vocational high school, as a participant in the Massachusetts apprentice program for four years. Once he graduated, he became a certified toolmaker. He consistently improved his skills and expertise, learning CAD, then progressing as an engineering designer. During his time as a process engineer, he became proficient in Six Sigma, ultimately certified with a black belt in 2008. His initiatives during this time included upgrading and improving processes and efficiencies throughout the entire facility. Resendes held positions as quality manager and special project and engineering manager at Larson.

In his current position, Resendes will be running the engineering and tool departments, overseeing 13 colleagues. After working on projects in aviation, the U.S. Navy, and for a high-tech start-up with MIT graduates during the time away from Larson, Resendes is ready to bring all that valuable experience back to the production floor with him. He said, “I’ll be working with customers on their design for manufacturability initiatives. My time away was fruitful, allowing me to see how niche manufacturing is done around the world; now I can utilize that knowledge here. Knowing the nature of the quick-response and collaborative team environment here at Larson—as opposed to what can be prohibitive in larger organizations—I look forward to diving in and making positive, timely outcomes happen for customers.” Resendes also explained that his wide exposure affirmed that Larson is unique because its production systems for deep draw stamping are world-class. He has seen no cell design and one-step process as efficient as Larson’s in all his travels.

Ray Niquette, Jr., VP at Larson, said of Resendes, “Because he progressed through virtually the entire process of how a part is made—building the tool, designing it, and running it on every level—he understands how things are made, from the ground up. This is his strong suite, and we are happy to have Manny back with the Larson team.”

Since its inception in 1920 in Attleboro, MA, Larson Tool & Stamping Company has been making a difference as a valued supplier of precision metal stampings and assemblies to hundreds of companies in the United States. Larson provides high-quality, cost-effective solutions with its wide range of capabilities that include forming, stamping, deep drawing, assembly, brazing, painting, coining, and more. Through significant investment in leading-edge manufacturing equipment and the loyal support from customers and co-workers, Larson perpetuates the commitment made by its founders to do whatever is necessary to meet and exceed customer expectations.

We’d love to help solve your difficult design and production challenges by providing high-quality, cost-effective solutions. Contact us for a quote.